Monthly Board Meeting November 29th @ 5:00 PM ALL members are welcome to attend 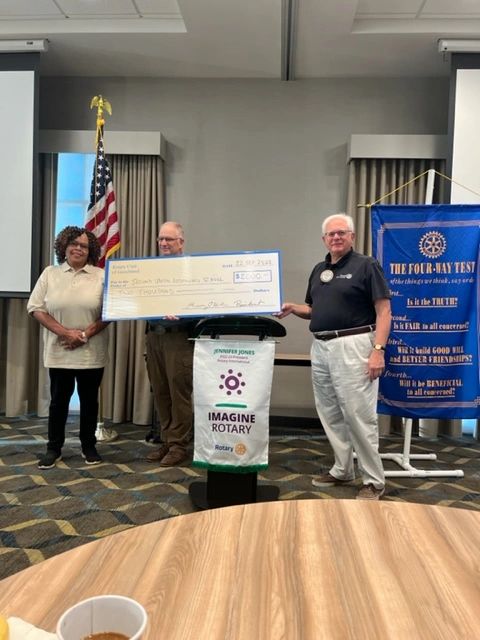 Second Union Rosenwald School Museum, Inc.  was presented $2,000 from the Goochland Rotary to replace the existing handicapped ramp with  a new one built out of composite materials. Vice President, Lil Tyler, accepted the presentation.

Honoring A Legacy Of Learning

News Article -Review from Lt. Governor Sears Visit on May 17

Hope to see you there!

Two (2) students from Goochland High School accepted at an accredited four-year college/university will be awarded a $500 scholarship.

Two (2) students from Goochland High School accepted at an accredited two-year community college will be awarded a $250 scholarship.

SURSM College Scholarships are not renewable.

All completed applications must be emailed to SURSM at jule0424@gmail.com by Monday, April 19, 2021. Only complete application packets will be considered.

All applicants are responsible for having their applications and essays proofread by at least two (2) other persons before submitting to SURSM, i.e. your guidance counselor and/or English teacher.

Will graduate from Goochland High School in Spring of 2021

Demonstrate completion of a minimum of 20 hours of community service

HOW TO APPLY and SUBMIT YOUR SCHOLARSHIP APPLICATION

To apply, please contact the Guidance Department at GHS for a printed copy of the 2021 SURSM College Scholarship Application.

Please scan necessary components prior to emailing your application packet to SURSM.

All components must be received by the due date for your application to be considered.

NO partial application packets will be considered.

Ryan will be attending the University of Virginia in the fall, enrolled as a Rodman Scholar of Engineering.

He is extremely excited to attend UVA, as it mean he can continue to mentor

Jasmine will be attending VCU in the fall. She will be majoring in pre-nursing on a pre-med track in order to gain her Bachelors in Nursing. Her future career is to become a pediatric nurse practitioner.

Megan will be attending Christopher Newport  University in the fall.  She will be majoring in biology with a minor in leadership studies.  She will be getting her minor through the Presidential Leadership Program (PLP).  She will also be following the pre-med track, pursuing a biology major in hopes of becoming an anesthesiologist.  In addition, she will be a part of Honor's College.

Elizabeth will be attending the University of Virgina.  She will be majoring in nursing and ultimately becoming a Certified Nurse Practitioner.

At the end of a very dark and uncertain year, the Rosenwald Park Campaign was given a key victory by the last-minute passage of The Julius Rosenwald and Rosenwald Schools Act of 2019.    The legislation is now on its way to the White House for the President to sign.

The House (Bill HR 3250) was introduced by Representative Danny Davis (D-IL-7).  A Subcommittee hearing was held on October 29, 2019, and a markup of the Bill was passed by unanimous consent on March 11, 2020, in the House Natural Resources Committee.  Forty-three Representatives cosponsored HR 3250.

The Senate Bill (S. 1863) was introduced by Senator Richard Durbin (D-IL) and had a Subcommittee hearing on March 4, 2020.  A markup of that Bill was not prepared.  Nine Senators cosponsored the Bill.  Both Bills had bipartisan support.

Shortly thereafter, the COVID pandemic spread through the nation.  Spring became summer, followed by fall.  The Campaign was advised that passage of the legislation was most unlikely in this session of Congress.

But last week Congressional staff in both Houses of Congress found a path forward for the legislation.  The House passed the markup of HR 3250 on December 17, 2020, by a vote of 387 to five, a resounding victory.  And on December 21, the Senate passed HR 3250 by unanimous consent.

The late Congressman John Lewis, who attended a Rosenwald School in Alabama, was one of the eight lead sponsors of HR 3250.  It is most fitting that his name will be on the final law.  He always believed that hope is a powerful force.

The legislation directs the National Park Service to conduct a special resource study of the sites associated with the life and legacy of Julius Rosenwald, especially the Rosenwald Schools.  This is the first key step in ultimately creating the National Historical Park.

There are so many people to thank for this important victory.  They include the Congressional staffers, who against all odds, shepherded HR 3250 through to passage.  Also included are the Members of Congress who sponsored and co-sponsored the two Bills and their staffs.  Both the National Parks Conservation Association and the National Trust for Historic Preservation have been steadfast supporters of the Campaign from day one and worked vigorously to pass the legislation.  And thanks to the 40 non-profit organizations that officially supported the legislation.  Last but not least are all the Campaign supporters who wrote their Members of Congress asking them to cosponsor the Bills and our committed donors.

The Campaign is so grateful.  Working together we will create the Julius Rosenwald & Rosenwald Schools National Historical Park.

We are working to reorganize Second Union Rosenwald School Museum to make it more community friendly and interactive. There is a lot of work to make this happen; therefore, we need your help! The work involves relocating books and artifacts, moving and rearranging furniture, organizing files, being a volunteer docent, and MORE!

If you have 2-3 hours to spare, please contact us at our e-mail (secondunionrosenwaldschool @gmail.com)

We are excited and hope you will join us in this endeavor!

Getting to Know Us

Using the SOLs as a guideline, Goochland High School students participate in activities.

Better yet, see us in person!